My, my. It’s been a while since we’ve been to the Ouray Ice Park, hasn’t it? So with no futher ado, let’s dive right in, shall we? These photos were taken by my climbing pal Ania Wiktorowicz just this month. I like to call this ice climbing top rope anchor the loooooooooooong anchor. Not that there’s anything particularly wrong with a long anchor. At Ouray you often sling a tree set back 15 or 20 feet back from the cliff wall, so the length here isn’t unusual. But that’s not what’s Jive-Ass about it. 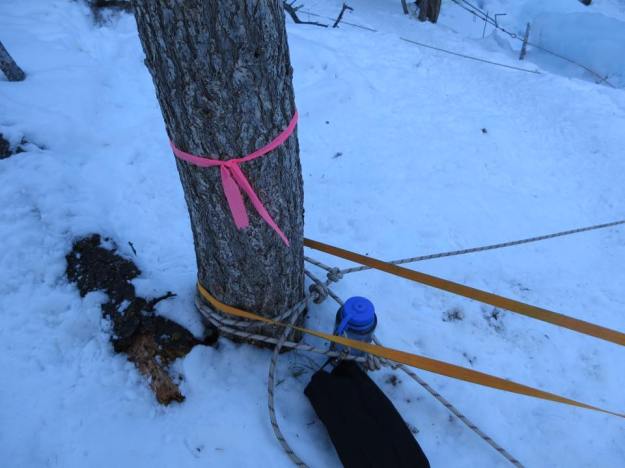 Let’s see, let’s sing the anatomy song on this one. The tree bone’s connected to the nylon sling bone…

The nylong sling bone’s connected to…another nylong sling bone. The…wait! Isn’t there suppossed to be a carabiner in here somewhere? Preferably a locker (since this is a single point of failure)? Nah! Just girth hitch one sling to another. We’ve addressed this issue before here, and here. This practice is, um…er…(cough! cough!) Jive-Ass.

And yeah, yeah, I know. It’s a freakin’ top rope anchor. No one’s going to crank that much force on it. It’ll probably be fine. Fair enough. It probably will. Probably no one will fall to the canyon floor and break both ankles. Probably not. But you really shouldn’t connect soft goods to soft goods like this–especially where it’s a single point of failure. “Probably” isn’t the same as “bomber”, and when you’re standing on the nice flat ground next to a tree, why not just go bomber? 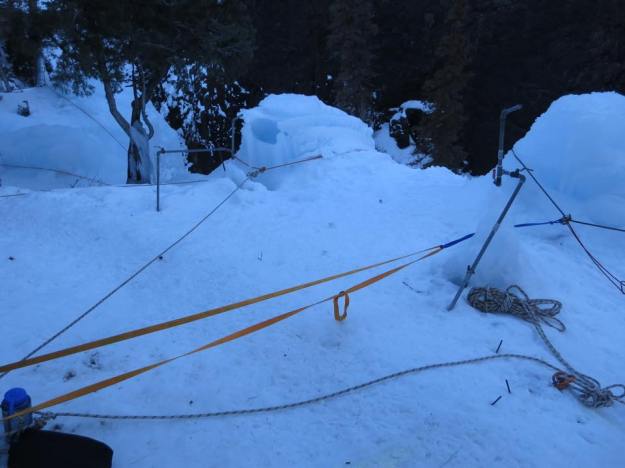 My what a loooooong ice climbing top rope anchor.

And the final product. Try not to break off the sprinklers! That’s how they make the ice. You kids get off my route! And watch those crampons! This anchor isn’t EARNEST (no redundancy)!

1 thought on “My What a Long Anchor!”