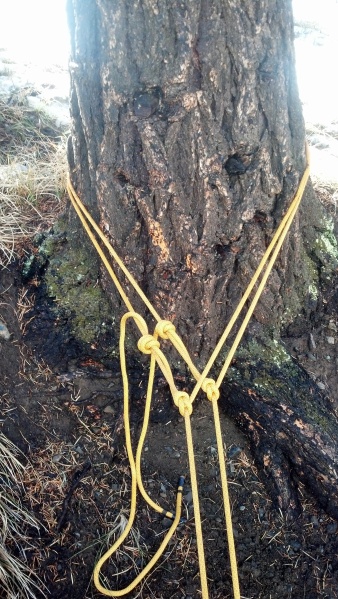 Lest you get the impression that all ice climbing anchors at the Ouray Ice Park in Colorado are jive-ass (they aren’t), here is a bomber climbing anchor. It’s quite aesthetically pleasing, actually–beautiful even–with its symmetrical bowlines with overhand back up knots. Personally I prefer to have the overhand back up knot right up against the bowline knot to keep everything from slipping, but this set up is gorgeous nonetheless. EARNEST and SERENE to a fault, it’s made of a single piece of what looks to be 7 mm cord. The power point was a “super 8”. I talked to the builder and he was very proud of his anchor. The pride he takes in his work shows.

Why are so many of my jive-ass anchor photos from the Ouray Ice Park? Or perhaps a better question is: how am I able to produce so many jive-ass anchor photos from the Ouray Ice Park? I think it’s simply a matter of sheer numbers and access. On a typical day there are dozens and dozens of top rope ice climbing anchors built in the park–many of them right next to one another. There are few places–rock climbing crags included–where a person can witness so many climbing anchor set ups in one place in one day. And given the sheer number, odds are that you’re going to encounter at least one or two anchors built by someone with inadequate (or no) climbing anchor construction training. All of that said, most of the climbing anchors one encounters there are perfectly bomber.